As readers of this site will know, BREMF has recently presented an online Festival of 10 filmed events on YouTube and Facebook under the title ‘BREMF@home’. Each film was ‘premiered’ at a set date and time, and then stayed online for 7 days. The 10 films were watched by over 75,000 people and generated more than £13,500 in donations. We trialled an innovative system of ‘voluntary tickets’ – not paywalling the events, but offering audience members the chance to book a ticket voluntarily (at a suggested donation amount), either before or after viewing. 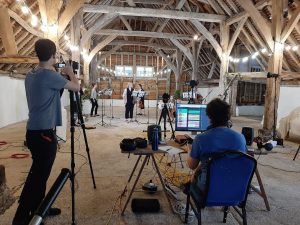 Back in May 2020, looking at historical precedents, we took the view that our usual live autumn Festival of 25-30 events – involving over 100 musicians and using churches with limited capacities and cramped facilities – wasn’t going to be possible in 2020. So we decided to move the Festival online, and wanted to take full advantage of the opportunities of the digital medium by making more than just filmed concerts. Our BREMF@home events combined film of the musicians performing with footage of the natural world, animation and interviews with artists.

2020 has certainly been a steep learning curve – we’ve been putting on live events since 2002, and although we’d previously documented a few events by filming them, and experimented with using projections as part of a live event, we had never made films before. Filmmaking is a totally different genre to live concerts, with different stresses and different timescales. Here are a couple of the stand-out things we learned:

We have been really delighted by the response to our BREMF@home events, and hope to experiment with a mixture of live and filmed events in 2021.